The following Youtube video from Business Insider uses infographics to visually demonstrate the ethnic and cultural diversity of the United States. Pay special attention to the percentage of immigrants, children of immigrants, the languages spoken at home, and religious adherence. It’s a fascinating way to look at what is otherwise a difficult topic to understand:  https://www.youtube.com/watch?v=mCTaiKxpWSA

The 2016 video was compiled from U.S. Census data. Here’s what demographic data looks like without infographics. The following are the 2018 U.S. Census estimates for the Asian American population of the United States:  https://data.census.gov/cedsci/table?q=united%20states&lastDisplayedRow=18&table=DP05&tid=ACSDP1Y2018.DP05&g=0100000US

This is the 2018 estimates for the Asian American population of Louisiana:  https://data.census.gov/cedsci/table?q=louisiana&lastDisplayedRow=18&table=DP05&tid=ACSDP1Y2018.DP05&g=0400000US22

And, this is the 2018 estimates for the Asian American population of New Orleans, which I presume is the New Orleans Metropolitan Statistical Area, not just Orleans Parish:  https://data.census.gov/cedsci/table?q=new%20orleans&lastDisplayedRow=33&table=DP05&tid=ACSDP1Y2018.DP05&g=1600000US2255000

[Business Insider, U.S. population in 2016 by religion. Over 20% of Americans do not participate in any religious beliefs.]

Before this (the 2000 census for example), you will need to download one of the “official publications” in PDF format and search the table of contents. Every official census was collected data differently, so it takes some guesswork to find anything useful: https://www.census.gov/programs-surveys/decennial-census/decade.html or https://www.census.gov/programs-surveys/decennial-census/decade.2000.html

By the way, having done statistical census research in person, I have discovered that locating and analyzing statistical data is mind-numbingly difficult and subjective. I truly despise quantitative research… You often hear politicians citing statistical and economic data, but I don’t think very many have pulled the numbers in person from hundreds of pages of published government tables like I have. The numbers are often contradictory and unreliable, so I never really trust statistical data, and I always need to know the source and how that data was collected. This kind of information is most useful when charting trends over many years, where the margins for error tend to iron themselves out. 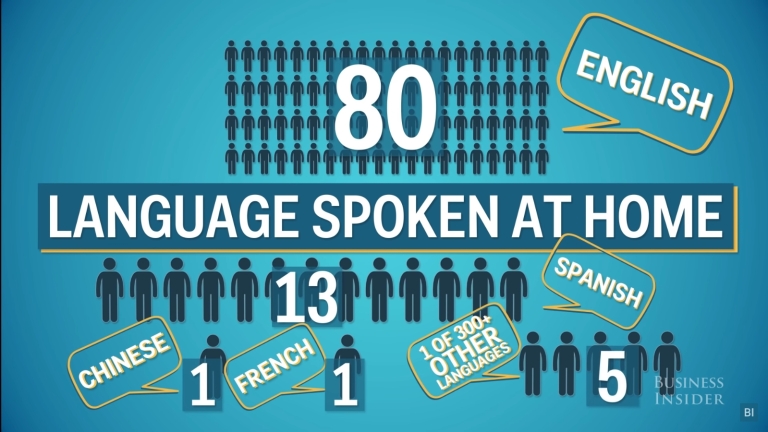 [Business Insider, U.S. population in 2016 by languages spoken at home. This table says that 20% of Americans speak a language other than English with their families.]

But anyway, census data does tell us several things that I talk about in my research. First, the Chinese American population is not evenly distributed. We are disproportionately located in urban areas, especially where there are universities and hospitals, which produce the jobs that attract highly educated Chinese Americans. New Orleans is such a place, so even in Louisiana, where Asian Americans represent less than 2% of the state, the New Orleans Asian population is roughly twice the percentage of Louisiana.

Even in New Orleans, this population is not evenly distributed, so along the Lake, where there are many Chinese, Chinese Americans can comprise an even higher percentage of a neighborhood or school district. In New Orleans East and the Westbank, where the Vietnamese are concentrated, there are places where Vietnamese Americans could comprise 33% or more of a neighborhood. This disproportionate representation is especially noticeable in school districts and certain professions, like medicine and science, where Asian Americans often have a dominant presence.

Second, the Vietnamese are the largest group of Asian Americans in Louisiana and New Orleans, but the Chinese, Asian Indian, and Filipino populations are also large enough to form communities and affect the local economy, as evidenced by the ubiquitous Chinese restaurants and businesses throughout the city and state. A surprisingly large number of restaurant and motels franchises are owned by Indian Americans, and disproportionate numbers of Filipino American teachers and nurses work in our state. The service and hospitality industries are also fields where Asian Americans have a dominant presence today.

Third, the Asian American population in both the United States and Louisiana are rapidly growing, and have been for every decade since the 1970s, mostly due to foreign immigration.

Sometimes, critics complain that modern American society is putting too much emphasis on diversity in history writing and popular culture in general. However, I spent more than a year living in China and Taiwan, where almost everyone is Asian, and Caucasians are a marginalized minority. As soon as I stepped foot in the United States again at LAX, the ethnic and cultural diversity of this country became immediately obvious. Likewise, sitting in the Office of Motor Vehicles for three hours is an experience in diversity and the vast differences in wealth and education in this country.

Diversity is an integral aspect of this country. It’s part of what makes us Americans, and it makes us Americans very different from most other countries in the world. In the past, our textbooks and our media have failed to reflect the diversity of this country, but ignoring diversity creates a distorted and inaccurate picture of the U.S. population. It’s a disservice to our people.

Really, the question should be how do people of diverse backgrounds in the United States interact with each other, because diversity is not necessarily a good thing. Diversity leads to the exchange of ideas and innovation when society is inclusive and people are respectful to each other. Diversity leads to conflict when society is intolerant and people project their fears and stereotypes on each other. We teach diversity as a virtue, but diversity is not a virtue at all – it simply exists. Really, it is inclusion and tolerance that are virtues.

“This animation puts the entire US population into perspective.” Business Insider, 2016. Accessed from Youtube (https://www.youtube.com/watch?v=mCTaiKxpWSA).

One thought on “Population of New Orleans 紐奧良人口”