[Nguyen Van Sau and Nguyen Van Chinh, on trial for the murder of a fisherman in Seadrift, Texas, 1979.]

In a largely forgotten incident in 1979, the murder of a Texas fisherman began a wave of violent attacks against Vietnamese Americans throughout the Gulf Coast region.  When the South Vietnamese first settled here in the 1970s, many of these “boat people” had been fishermen in their homeland, and they returned to fishing to support their families and rebuild their lives.

However, the 1970s were a time when decades of over-fishing and coastal erosion were reducing the fish stocks that had supported local fishermen in the past.  Government regulations were passed to protect these fish stocks, but these regulations also reduced the profitability of commercial fishing.  Growing environmental concerns resulted in regulations on the types of nets fishermen could use, reducing profitability even more.  Most Gulf Coast fishermen are essentially private contractors.  They own their own boats and equipment, and these boats are often operated by members of the same extended family.  It was these ordinary fishermen who were hurt most by government regulations and environmental changes.  Most of these fishermen had been in the same industry for generations, but there was no longer any guarantee their livelihood and culture could be passed on to the next generation.

It was in this context that the Vietnamese refugee fishermen, most of whom could not speak English, first arrived in this country.  They had no knowledge of the many laws and customs followed by local fishermen, and neither the locals nor the government had the language skills to communicate with these new residents.  There was no significant Southeast Asian American population in North America before the 1970s, and polling data of the time suggested that most Americans opposed allowing Southeast Asian refugees to enter the United States.  The unpopularity of the Vietnam War also affected American attitudes towards the boat people.  Notable exceptions were the Catholic Church and most protestant Christian churches, which sponsored Southeast Asian families and welcomed them into their communities.

By 1979, disputes over fishing rights between the locals and the Vietnamese escalated into violence.  On August 3 of that year, a local crabber named Billie Joe Alpin confronted a group of Vietnamese fisherman in Seadrift, Texas, between Corpus Christ and Galveston, who he suspected had set crab traps close to his own, in violation of local custom.  An altercation took place, and Mr. Alpin allegedly attacked a Vietnamese fisherman with a knife.  A former South Vietnamese marine named Nguyen Van Sau took out a pistol and shot Mr. Alpin, who died later that day.

Nguyen and a brother named Nguyen Van Chinh were accused or murder, but during the trial, they were acquitted on the basis of self-defense.  Following the acquittal, local fishermen in Seadrift set several Vietnamese fishing boats and homes on fire, and there was even a failed conspiracy to bomb a crab processing factory where Vietnamese women were working.  The Ku Klux Klan began holding anti-Vietnamese rallies, burning crosses at the homes of Vietnamese fishermen, organizing a “boat parade” with armed klansmen along the Texas coast, and spreading violence to the rest of the Gulf Coast, including other fishing communities in Texas, Louisiana, and Florida.  Following the burning of a Vietnamese boat in Plaquemines parish, the archbishop of New Orleans, Philip Hannan, personally intervened and condemned the violence.

In 1981, a group of Vietnamese American fishermen, with the assistance of attorney David Berg of Houston and Morris Dees of the Southern Poverty Law Clinic, filed a class-action lawsuit against the Ku Klux Klan in federal court.  The Vietnamese accused the KKK of raising a private army and performing military exercises for the purpose of terrorizing them and preventing them from earning a living, in violation of their fourteenth amendment rights.  The Klan counter-argued that they were exercising their first and second amendment rights.

In the case of Vietnamese Fishermen’s Association v. Knights of the Ku Klux Klan, the federal Southern District Court of Texas in Houston ruled, on Jun. 3, 1982, that the first and second amendment were not unlimited and did not protect threats of violence or “fighting words.”  According to the court, “regardless of whether it is called ‘defense training’ or ‘survival courses,’ it is clear to this Court that the proliferation of military/paramilitary organizations can only serve to sow the seeds of future domestic violence and tragedy.”  A court order was issued banning all forms of Klan harassment against the Vietnamese fishermen in Texas. 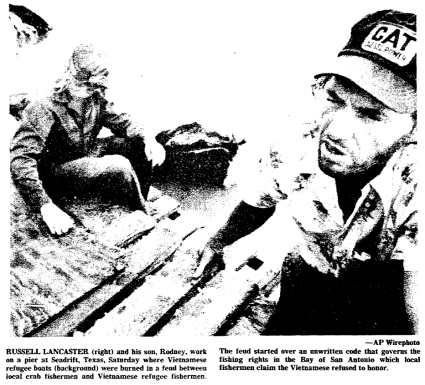 “Seadrift:  A Documentary on Refugees, Racism, and Reconciliation.”  Title 8 Productions, 2018.  Accessed from Youtube (https://www.youtube.com/watch?v=QzYeVAPNgBY). [This is a trailer, not the full documentary.]